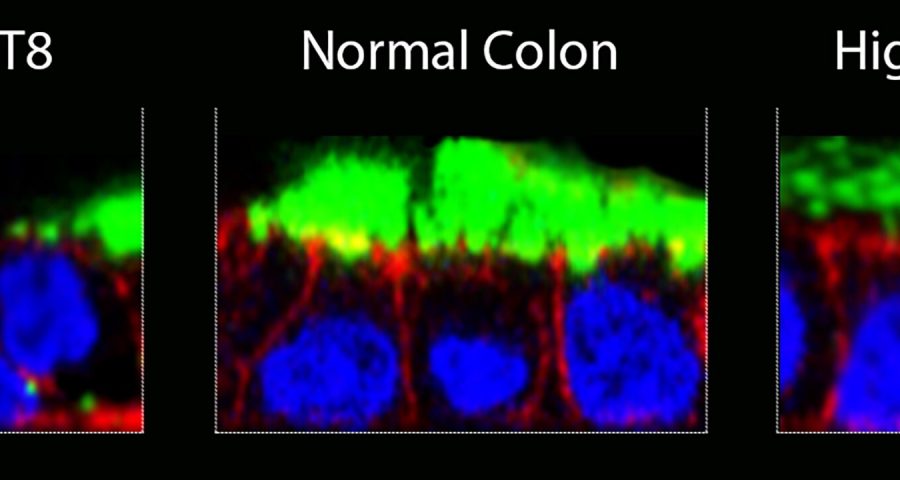 Ulcerative colitis is the most common type of inflammatory bowel disease, characterized by chronic ulcers and inflammation in the colon and rectum. Symptoms can be lifelong and range from mild to life-threatening. There is no known cure for the disease.

Researchers suspect that a malfunctioning immune system, where immune cells attack the epithelial cells in the colon, could explain the recurring bouts of inflammation that are characteristic of the disease. However, what makes the immune system attack healthy cells in the first place remains a mystery.

Research published in the Proceedings of the National Academy of Sciences proposes a set of conditions that could act as a starting point for the development of ulcerative colitis. Using a combination of experimental data from patient biopsies, mouse models and cell lines, researchers show the disease may be caused because of increasing levels of the enzyme alpha 1-6 fucosyltransferase—also known as FUT8—in the colon. Levels of this enzyme are normally low in healthy individuals.

FUT8’s main function is to modify the physical properties of many different types of proteins through a process known as fucosylation. In 2016, research led by Dr. Naoyuki Taniguchi from the Osaka International Cancer Institute showed that mice which lacked FUT8 were protected from ulcerative colitis, but it was unclear why. This caught the attention of Vivek Malhotra’s research group at the Centre for Genomic Regulation (CRG) in Barcelona, which back in 2013 had found that FUT8 could play a role in the secretion of mucins, proteins that form the major component of the mucous layer. The researchers decided to work together to further elucidate the role of FUT8 in ulcerative colitis.

Mucins are large proteins that swell several hundred times in volume upon their release into the extra cellular space. It is estimated that humans secrete an average of one liter of mucins per day, which combine with other molecules to create mucus—a thick, slippery liquid that coats, lubricates and protects the entire gastrointestinal tract, a surface area that is roughly half the size of a badminton court.

The researchers then checked whether the mucous layer was altered in mice depleted of FUT8, which are protected against ulcerative colitis. They found that FUT8 knock-out mice had a thinner mucous layer in comparison to mice with higher expression of FUT8.

The researchers next explored why these changes in the mucous layer were occurring at a molecular level. Using colon cell lines, they found that different levels of FUT8 alter the ratio of two different types of mucins secreted by cells—Mucin 2 and Mucin5AC, which form the scaffold of the mucous layer. They also found that FUT8 alters the expression of Mucin 1, which acts as an anchor for bacteria at the cell surface.

“We show that when FUT8 is overexpressed, as seen in patients with ulcerative colitis, epithelial cells secrete mucins that is less compact compared to normal mucus. Being less compact, the mucous layer is more permeable, and we believe this permits bacteria to reach epithelial cells in the colon more easily. The mucous layer will also be stickier, making it more resistant to washing. This in turn traps bacteria and other pathogens within the mucus, which gives them a longer time to invade the underlying cells,” explains Dr. Gerard Cantero-Recasens, who carried out the work in Dr. Malhotra’s lab at the CRG and is now Junior Principal Investigator at the Vall d’Hebron Research Institute (VHIR) in Barcelona.

“In contrast, when FUT8 is depleted, epithelial cells secrete mucins that form a more compact mucus. This makes the mucous layer less permeable, and easily washed away. Since cells continuously secrete more mucins, bacteria that are trapped within mucus are constantly removed. We believe that less bacteria means less contact with the epithelium, which in turn prevents or reduces inflammation. This explains why mice lacking FUT8 are protected against ulcerative colitis,” adds Dr. Cantero-Recasens.

In healthy individuals, the distal colon has two mucous layers. The outer layer is where many different types of microbes live, both harmful and beneficial. The inner layer sticks closely to the epithelial layer and is generally sterile, keeping harmful bacteria in the gut’s tract or in the outer layer from reaching the cells that line the large intestine, preventing inflammation or infection. One theory is that FUT8 levels are purposefully maintained low in the colon of healthy individuals so that mucins can form the layer impermeable to bacteria. While the researchers show that FUT8 alters the mucous layer and this could lead to the initiation of ulcerative colitis, why the enzyme is dysregulated in patients remains an open question.

Another unknown is what happens after the initial bouts of inflammation that are characteristic of ulcerative colitis. The researchers believe the gut microbiome could play a role. “The mucous layer is first line of defense against dangerous microbes, toxins and harmful by-products of digestion. It also hosts a thriving population of beneficial microbes that are critical for human health. It is likely that changes we observe in mucins impact the gut microbiome, which in turn elicits an immune response. Evaluation of the gut microbiome in normal and patients’ guts should help address this question,” says ICREA Research Professor Vivek Malhotra, senior author of the study and Coordinator of the Cell and Developmental Biology program at the CRG.

The findings pave the way for the development of new tests to detect ulcerative colitis before symptoms appear and to measure the prognosis of the condition. “We could measure levels of fucosylation or MUC1 release in the mucus of the large intestine by taking stool samples from patients. It would be a relatively easy test and routine as carrying out a blood test,” explains Dr. Cantero-Recasens.