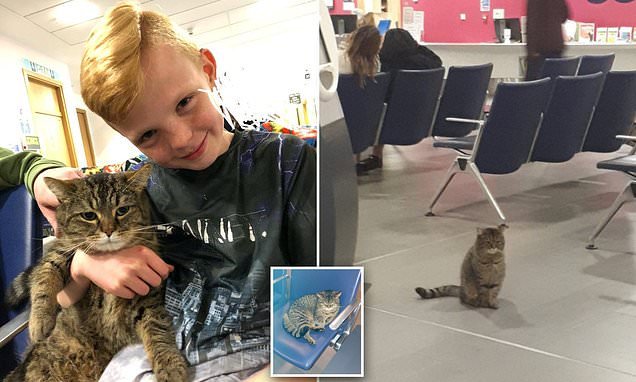 The popular moggy has become something of a celebrity among staff and visitors to Southmead Hospital in Bristol.

He has been visiting from his nearby home for the past year, cheering up children waiting to be seen and welcoming staff such as paramedics and police officers.

The tabby, three this August, has a particular penchant for napping in filing baskets, on chairs, underneath wet floor signs and on the reception desk countertop.

His owner, Vikki Gillies, said she is always seeing posts online from locals who are concerned the hospital cat is homeless. 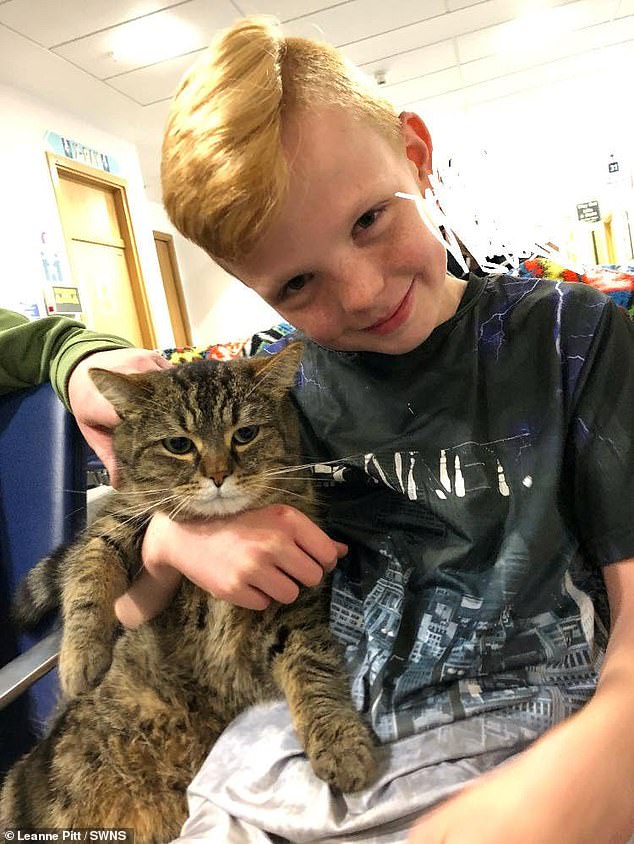 An adorable pet tabby cat called Kolo has become popular with patients during his regular wanderings into his local hospital’s A&E. Leanne Pitt was grateful Kolo kept her son, Leo, 10, who has ADHD, occupied during a long wait to be seen (pictured) 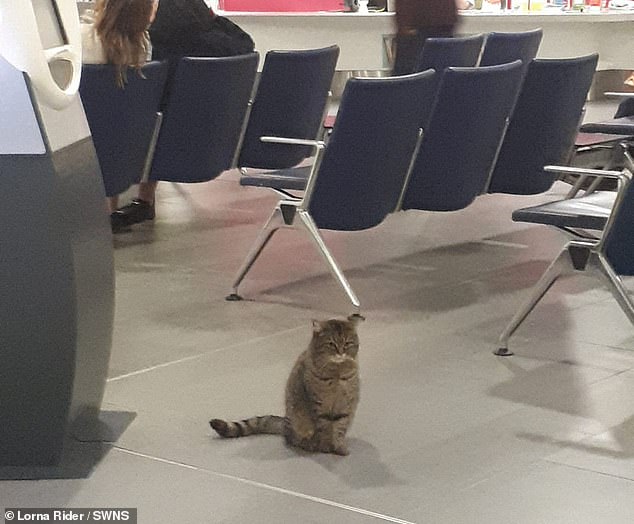 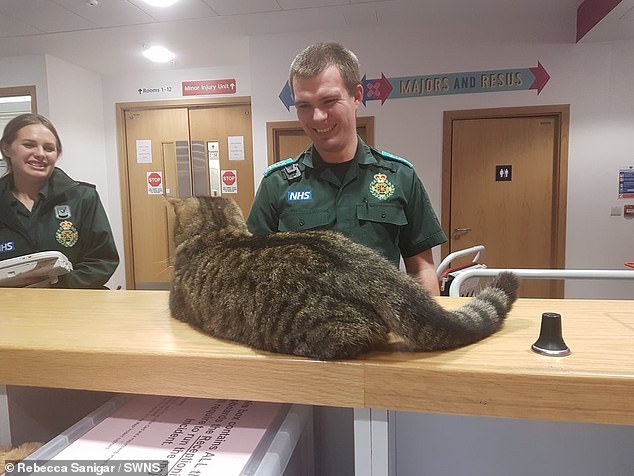 Kolo has become something of a celebrity among staff and visitors. He likes to sit on the reception desk countertop (pictured) and welcome staff such as paramedics

Ms Gillies, who has made Kolo his own Facebook page – The Adventures of Kolo, said: ‘I just think it’s hilarious.

‘We live right by the A&E entrance and our back garden backs onto the hospital. He always used to stay in during the day and go out at night through his cat flap.

‘We just started getting people saying he was at the hospital and he kept appearing on lost and found pet sites where people were wondering if he was lost.

‘It got so frequent with people thinking he was lost, I just thought it would be really funny to put all the pictures of him together on one page.’

Patients and staff who have got to know Kolo during his hospital visits love to share their photos of the cat lounging around the department.

Leanne Pitt shared an adorable photo of her son Leo, whose age is unknown, giving Kolo a cuddle during a recent visit to the emergency department.

Ms Pitt, who works in a different department at Southmead Hospital, said: ‘Leo suffers with ADHD really badly, and having Kolo at the hospital made a massive difference to the wait we had.

‘I was dreading taking him, as I knew how long we would have to wait, but that cat made a massive difference.’

Meanwhile, plenty of other patients have shared photos of Kolo taking a cat nap on chairs around the department, or on top of the reception desk.

Jess-Ann Gray, a staff nurse at the hospital, wrote on The Adventures of Kolo page: ‘Kolo thanks for giving me a cuddle and putting a smile on my face as I walked into work this morning. 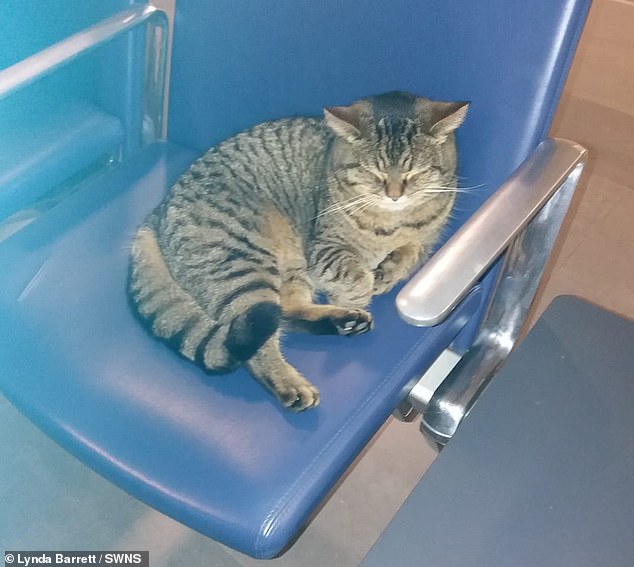 The tabby, who is three this August, can be found napping in filing baskets, on chairs (pictured) and underneath wet floor signs 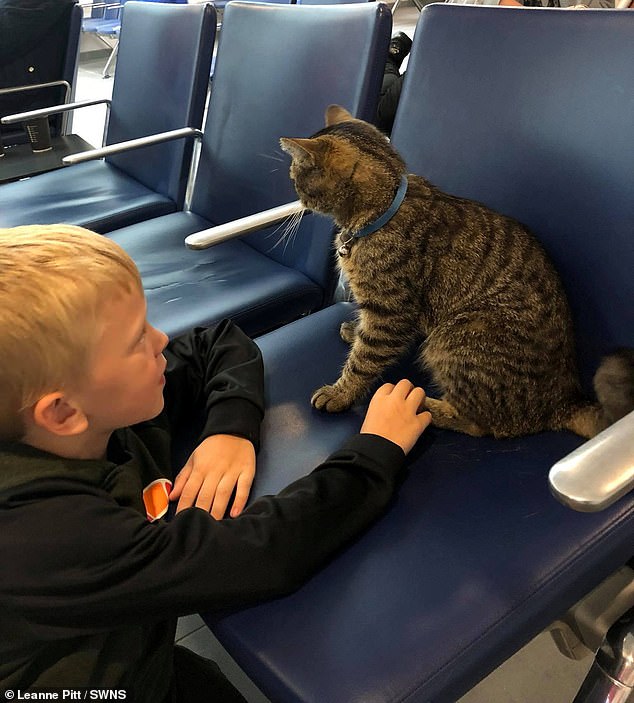 Ms Pitt said: ‘I was dreading taking him [Leo], as I knew how long we would have to wait, but that cat made a massive difference’ 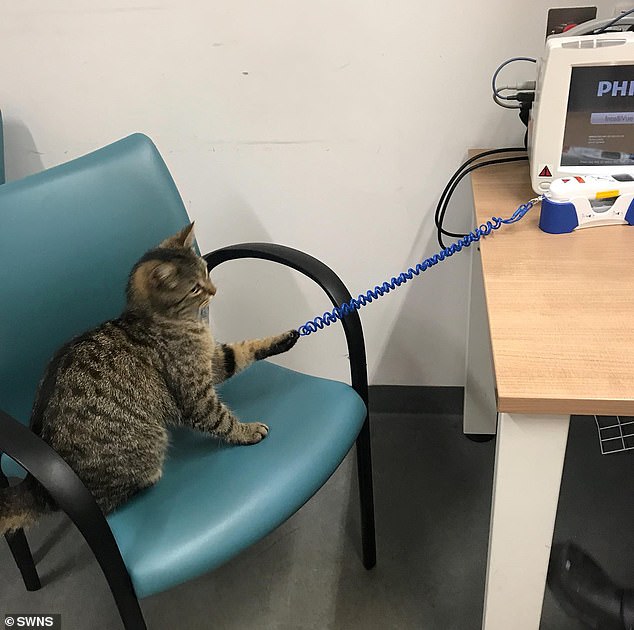 She said: ‘Kolo has become a very popular member of our team and is a great asset.

‘I promise we will care for him when he pops to see us and encourage him to come back to you also.

‘Although Kolo has a lovely temperament he is inclined to be a bit lazy and takes far too many breaks.

‘He has a performance plan which we are supporting him with. His attendance is also bit erratic which isn’t in keeping with the ethos of our team.

‘He does however bring great happiness and we all love him so we will cut him some slack! Keep us smiling Kolo.’

Ms Gillies: ‘People are always really happy to see him.

‘He won’t come and harass you, but he’s happy for you to stroke him and I think it’s really comforting and has a calming effect.

‘People make such a fuss of him and he’s not stupid – he knows he is going to get looked after there.

‘He goes behind the reception desk and on the chairs and they all just love him.’

But Ms Gillies also wants people to be aware that Kolo is not a stray and does have a home, where he is an extremely well-loved and well-fed pet.

She said: ‘Many people often think he is lost and take him to veterinary surgeries to be checked.

‘We set up his page to make people aware that he does have a loving home and isn’t a stray.

‘I have two kids who adore him so it’s really important to make people aware he does have a loving family.

‘People might think he does not have a home and think they are doing him a favour, but the truth is he just lives around the corner.’

IS IT HYGIENIC TO HAVE ANIMALS IN HOSPITALS?

We are told to wash our hands as soon as we enter the hospital – and animals are certainly no cleaner.

Patients in healthcare facilities come into contact with animals primarily through pet therapy, animal-assisted therapy, and when a service animal such as guide dogs for the sight impaired comes in.

Risks to patients from exposure to animals in the healthcare setting may be associated with transmission of pathogens – potentially dangerous bacteria – through direct or indirect contact or by a fluid droplet.

However, insufficient studies are available to produce generalizable, evidence-based recommendations. Therefore, there is a wide variation in policies and practice across healthcare institutions, Infectious Disease Advisor reports.

The Society for Healthcare Epidemiology of America (SHEA) wrote guidance in 2015 which outlines a set of practical recommendations on this topic based on current knowledge and expert opinion.

Regarding pets, it said:

‘Pets should, in general, be prohibited from entering the healthcare facility.

Exceptions can be considered if the healthcare team determines that visitation with a pet would be of benefit to the patient and can be performed with limited risk. Even then, visitation should, in general, be restricted to dogs.

‘The patient must perform hand hygiene immediately before and after contact with the animal.’