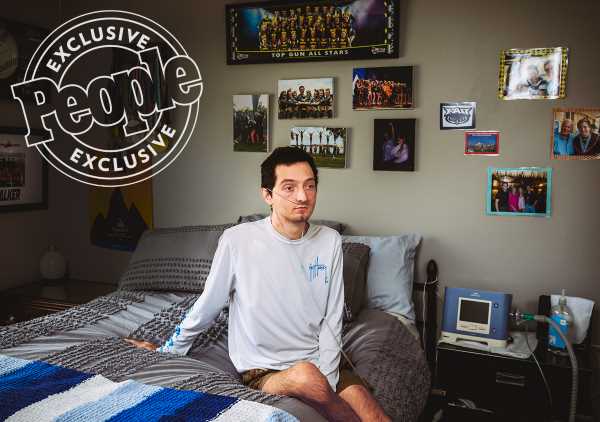 The 19-year-old Pennsylvania teen’s father was “kicking himself for not asking more questions” about his son’s vaping habit after doctors discovered that Mayo’s lungs were almost entirely blocked with solidified vaping oils, which they compared to bacon grease.

Mayo was admitted into the intensive care unit on Sept. 15, 2019 at Millcreek Community Hospital, where doctors found his lungs were quickly depleting.

Mayo’s parents, Tanya and Keith, were told that their son “has the lungs of a 70-year-old lifetime heavy smoker” and that “a full recovery is uncertain.”

“The pulmonary doctor said he had seen dead people with a higher O2 level!” Tanya wrote beside two photos of Anthony’s lungs on Facebook. “Now we pray that the ‘good’ lung doesn’t develop a mucus plug which would cause him to not be able to breathe at all.”

Anthony recovered enough to leave the hospital on Sept. 27, but his mom said “there’s still a long road ahead.”

After making the switch to vaping in order to try and quit cigarettes, the 17-year-old Texas teen decided to ditch both — but not soon enough.

The night she put down her vape for good, Livingston started to run a fever that eventually developed into pneumonia in both lungs. Livingston was put on life support at Children’s Medical Center Dallas, where her mother, Jennifer Audas, told Fox 4 News on Sept. 10, “she could have almost died.”

“The doctor said it looked like no pneumonia he’d ever seen,” she continued.

Audas said at the time that there has been no major progress with her daughter’s condition, but she is showing some improvement. They are not sure what long-term damage she may have.

The Utah teen vowed to “never touch a vape again” after nearly dying as a result of vaping every day for three years.

“I thought vaping was fine,” she told Fox 13. “I did all the tricks, all the time. I used all sorts of different products, like from all sorts of vape shops across Utah county.”

However, things took a turn in July 2019. Barely conscious, she was admitted to the hospital, where x-rays showed that she had severe lung damage. Her family elected to put her in a medically induced coma.

“We were scared we may never be able to talk to our sister again,” her siblings said on the GoFundMe page they created to help with medical costs.

After running several tests, doctors determined that Nelson had acute eosinophilic pneumonia, a rare lung illness, that “was definitely from vaping.”

After a course of steroids, Nelson immediately started to improve and was brought back out of the coma three days later. She has been recovering from home, but still needs to use an oxygen machine at night and often experiences sudden chest pains.

Neither Zohfeld nor his parents knew just how severely damaged the Texas teen’s lungs were until they suddenly failed on July 26, 2019.

“I woke up just throwing up everywhere, and my heart was beating out of my chest going 100 miles an hour,” Zohfeld told ABC affiliate WFAA.

His family rushed him to the Cook Children’s Hospital in Fort Worth, where he was eventually hooked up to an oscillatory ventilator that kept him alive for 10 days while doctors searched for a diagnosis. It wasn’t until a family member revealed that Zohfeld had been vaping regularly since the 8th grade that doctors were able to connect the dots.

Dr. Karen Schultz, a specialist in pediatrics and pulmonology, told WFAA that she believed the chemicals Zohfeld was inhaling from the vape pen caused his lungs to inflame to a point where they couldn’t exchange oxygen and carbon dioxide anymore. She added that his habit had scarred his lungs, according to CBS.

After 18 days in the hospital, Zohfeld was able to go home. He believes he was “definitely given a second chance.”

“This is really what could happen [from vaping] and it’s not something to look over,” he told WFAA. “They’re not as safe as you think.”

His family has started a GoFundMe page to help with the costs of his hospital stay, and with his upcoming rehabilitation program.

The Colorado teen’s parents, Ruby and Tim, thought they would be taking her to college for her freshman year. But they instead had to be by Johnson’s side in the hospital because of her vaping habit.

Johnson, who had been vaping for over two years, was diagnosed with the state’s first case of severe lung illness linked to vaping and now feels “lucky to be alive” after a fever and rapid heart rate landed her in the hostpital.

“We’re parents who are mad that these things are out there, and we’re mad that they’re easily accessible,” Ruby told CBS This Morning, who reported the story on Sept. 9, 2019. “Targeting a younger audience happened, and then when Juul was called on it, they went, oh, sorry, we didn’t mean to do that.”

After her near-death experience, Johnson is done with vaping forever.

This Texas mom wrote a candid testimonial about how her experience with vaping landed her in a medically-induced coma and nearly killed her after she contracted multifocal pneumonia, severe sepsis and acute respiratory failure with hypoxemia (ARDS).

“I got very sick around June 9th with stomach flu like symptoms,” she wrote on Facebook on Sept. 6, 2019. “I couldn’t hold any fluids down, I took everything you could imagine over the counter, tried drinking fluids but couldn’t keep them down, I was severely dehydrated.”

Days later, on June 12, 2019, she was rushed to the hospital with low oxygen and blood pressure levels.

“[Doctors] did a cat scan and [it] showed my lungs were full of fluid and [my] blood [tested] positive for blood clots,” Canada said. “I was so scared but more than anything in so much pain.”

Her condition continued to deteriorate, and on June 18, doctors made the decision to put her in a medically-induced coma.

“I was absolutely terrified that I was never going to wake back up and see my boys, family or friends again! I remember leaning over to my mom telling her just how tired I was of fighting and just couldn’t fight no more,” she said.

While she was sedated, doctors removed four liters of fluid from her lungs and she was brought out of the coma two days later. Canada was placed on a ventilator for three days afterwards and wrote that she “woke up a whole new woman with a whole new perspective in life.” She promised she would live life differently and “never take advantage of my lungs, a breath, again.”

The 19-year-old Pennsylvania teen became dependent on a heart and lung machine at Hospital of the University of Pennsylvania in September after suffering from an unknown lung illness that is likely due to vaping. At the time, doctors worked to identify Boclair’s lung problems and devise a treatment plan, but they’ve struggled with exactly how to help him.

“They know it’s vaping, but this is even new to the doctors,” Boclair’s mom Debbie told ABC 6 on Sept. 3, 2019. “They told me outright, we’re treating all the things he has. When he came in he had double pneumonia — they treated that with antibiotics. They’re treating all the different things. But there’s parts they don’t even know what’s going on.”

Debbie said then that doctors are unsure whether Kevin will recover on his own, require lung surgery — or even survive.

“I don’t know how we can get parents to stop the kids, so I want to tell the kids right out, you’re smart kids — just don’t do it,” she said.

“No parent should ever have to see that of their kid,” Boclair’s father Len added.

The Illinois teen and student athlete was hospitalized with severe lung damage caused by e-cigarettes, according to CNN, who reported the story on Sept. 13, 2019. Hergenreder, 18, was told by doctors at Advocate Condell Medical Center that his “lungs were that of a 70-year-old’s” and that “if his mom had not brought him to the hospital within the next two to three days, his breathing could have worsened to the point that he could have died if he didn’t seek medical care.”

Hergenreder’s mother Polly told the outlet that her son was “going through a pod and a half every other day, or a day and a half.”

“If I had known what it was doing to my body, I would have never even touched it, but I didn’t know,” Hergenreder said, adding that “it was scary to think about” the damage “that little device” did to his lungs.

After being released from the hospital, Hergenreder still finds it “difficult to even do normal activities, like going up stairs,” which leaves him winded. His future with sports is also in jeopardy.

“I was a varsity wrestler before this and I might not ever be able to wrestle because that’s a very physical sport and my lungs might not be able to hold that exertion,” he said. “It’s sad.”

Three months after trying his first Juul e-cigarette in December 2018, the 19-year-old college cheerleader was fighting for his life in a Orlando, Florida hospital.

“I begged my parents to let me die,” McKnight told PEOPLE, referencing the five months he spent drifitng in and out of consciousness while doctors fought to keep his inflamed lungs from collapsing. “I wouldn’t wish this on anybody.”

“His case is the worst I’ve seen so far,” recalled critical care specialist Dr. Charles Hunley with Orlando’s Regional Medical Center. “Walker was literally dying in front of our eyes.”

By early March 2019, McKnight couldn’t hold any food down and had fevers and chills. He was told by doctors he had the flu but four days later, his condition worsened. Doctors insisted that McKnight needed to go to a hospital emergency room where x-rays revealed that he had what appeared to be pneumonia in his left lung. He was immediately admitted to ICU.

“We lost him five times,” said his mom, Candy, who works as a critical care nurse. Doctors eventually determined that his infection was caused by adenovirus — often found in college dorms that normally only leads to a mild illness — but it wasn’t until Walker’s parents found Juul pods in his dorm room when doctors were able to understand how his lungs got so weak after contracting a relatively benign virus.

When McKnight left the hospital in July 2019, he had lost 80 lbs., and his left lung and both his kidneys were destroyed. He carries an oxygen tank with him wherever he goes, and will have to endure lung and kidney transplants to survive. Now at 20, McKnight’s life revolves around dialysis sessions, physical therapy, doctors’ appointments and twice-a-day naps. “This is like something I used to think only happened in the movies,” he said.