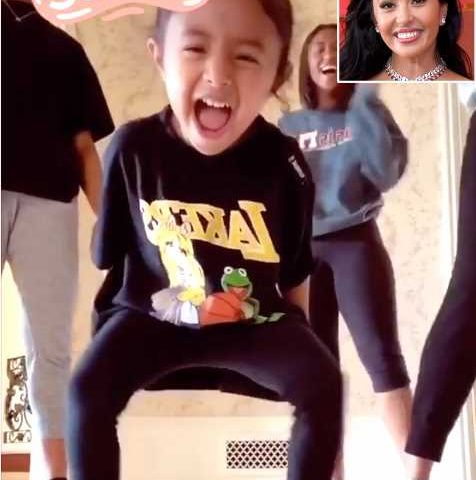 Vanessa Bryant may have a TikTok star on her hands!

On Sunday, Vanessa and Kobe Bryant‘s oldest daughter Natalia, 17, was making a TikTok with two of her cousins to Camp Rock‘s “We Rock” when they had an unexpected appearance from her younger sister Bianka.

In the middle of their dance, the energetic 3-year-old slid into frame and completely stole the show, dancing on her own and laughing at the camera as her big sister and cousins stood in disbelief in the background.

Once the shock wore off, the three older girls began clapping and cheering for the young star, who also seemed to be honoring her late dad with a Muppets-themed Los Angeles Lakers shirt.

“Little sister. Bianka Bella ❤️BB Kiddo 😊@nataliabryant#family #cousins,” Vanessa, 37, captioned the footage, which she shared with her friends and followers on Instagram.

It’s been an eventful and emotional weekend for the Bryant family, as Vanessa celebrated what would have been her 19th wedding anniversary with the NBA legend on Saturday — just one day after her late daughter, Gianna, was made an honorary draftee of the WNBA.

The 13-year-old, who died in the tragic helicopter crash that killed her father Kobe and seven others in late January, had always dreamed of following in her dad’s footsteps and making her own mark in the world of basketball.

“Thank you so much for honoring my Gigi and selecting her to be an honorary draft pick this year,” Vanessa said in a video message shared by the WNBA. “It would have been a dream come true for her. She worked tirelessly every single day. She wanted to be one of the greatest athletes of all time just like her daddy. So thank you, thank you for honoring my little girl.”

“Kobe and Gigi loved the WNBA,” Vanessa continued before offering her congratulations to this year’s draft picks. “Work hard. Never settle. Use that Mamba mentality.”

Vanessa later posted an emotional tribute to Gianna, sharing how proud she was of her daughter for being the “youngest draft pick.”

“I’m so proud of you, Gigi,” she wrote on Saturday alongside a photo of her late daughter in her Mamba Academy uniform.

“God I miss you baby,” she added. “You deserved to live a long, healthy and happy life. I wish I could hold you and tell you how proud I am of you. You’re the best, baby girl. Mommy loves and misses you more than I could ever express.”