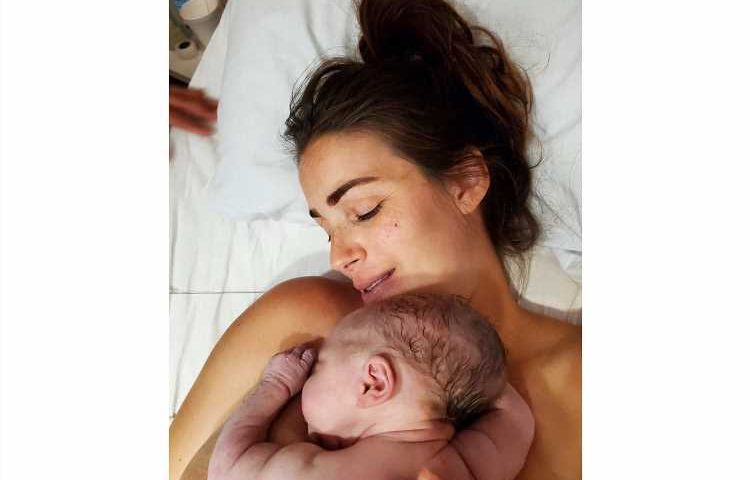 Elizabeth "Liz" Sandoz Presta's daughter Jovie Noelle is safe and sound now, but a stay in the neonatal intensive care unit following her Sept. 1 birth threw her parents for a loop.

On Monday's episode of her Miraculous Mamas podcast, The Bachelor alum and husband Vito Presta open up about Sandoz Presta's difficult labor with their daughter and the moments following her arrival when she wasn't getting enough oxygen and had to undergo close monitoring as a result.

"They kept saying, 'She's wet.' They did the suction a bunch of times," new dad Presta recalls, explaining that a NICU nurse did an assessment and was initially just going to bring Jovie into the NICU for a few hours to monitor her oxygen level, heart rate and breathing.

But once she arrived in the NICU, the medical team observed that Jovie's "oxygen was dipping." So they admitted her, put her on "a high level of oxygen" and took an X-ray that the doctor told Presta looked "the complete opposite" of how it was supposed to.

"She's not breathing, her ribs are retracting … babies breathe with their bellies and she wasn't really breathing properly," he says, adding that it was "really hard to watch" his daughter attached to machines and struggling for oxygen. "You could tell she wasn't getting air. She was just very wet and the X-rays were not good."

September 1st at 9:41pm, Jovie Noelle made her entrance into this world. We are so incredibly in love and grateful for the support we had in labor and delivery and this week following. Although she made her entrance into the world a week ago, she just made it home to us. I planned a lot for birth but I never planned on leaving my daughter in the hospital NICU. She is such a strong fighter and has wowed the doctors with her ability to overcome since day 1. We are still processing this last week and going to take some time together as a family to soak everything in since this is the first time we get to be all together as a family. We could not have done it without our incredible @omgmidwives family, our midwife @sarahstetina and our doula @karishmadarji We cannot wait to share Jovie’s birth story with you next week on the podcast! 📸 @karishmadarji (my amazing doula)

The Mom with a Preemie in the NICU Just As Coronavirus Began to Hit Hospitals: "It Became More Restrictive Every Day"

Presta recalls there being "a lot of highs, a lot of lows, a lot of crying, a lot of gratitude" in those "tough" first moments of their daughter's life — and the way she recovered "was a miracle," according to doctors.

"It was so hard, and those first days we would cry so much," says Sandoz Presta, 32, through tears. " 'Cause you plan so much for your birth, and I knew all my options. I knew my pros and cons, the risks and benefits … but we didn't plan on leaving without her. So that was so hard."

"Coming home was hard — trying to pump and wanting to be there for her as much as we could," adds the new mom, who lives about 30 minutes away from the hospital. "We would be there all day, get home at midnight, go back early in the morning and do it all again."

Thankfully, the couple received "continual good news in the way that [Jovie] recovered." And as for exactly how that happened, Sandoz Presta, who is a birth doula, said her medical team told her, " 'Honestly we're never really gonna know.' They said nothing about her case was normal. So we're just believing everything was a miracle and she was watched over and protected. We're so happy to have her home."

Such an amazing day with family and friends. We are all so excited to meet this little nugget 💛

Sandoz Presta announced her first child's birth on Instagram Wednesday. "September 1st at 9:41pm, Jovie Noelle made her entrance into this world," she wrote, sharing the name of her newborn alongside a photo of the child. "We are so incredibly in love and grateful for the support we had in labor and delivery and this week following."

"Although she made her entrance into the world a week ago, she just made it home to us. I planned a lot for birth but I never planned on leaving my daughter in the hospital NICU. She is such a strong fighter and has wowed the doctors with her ability to overcome since day 1," she added.

The new mom told PEOPLE at the time of her announcement that Jovie means "joyful," explaining, "We are big on name meanings and want to speak joy over her life."