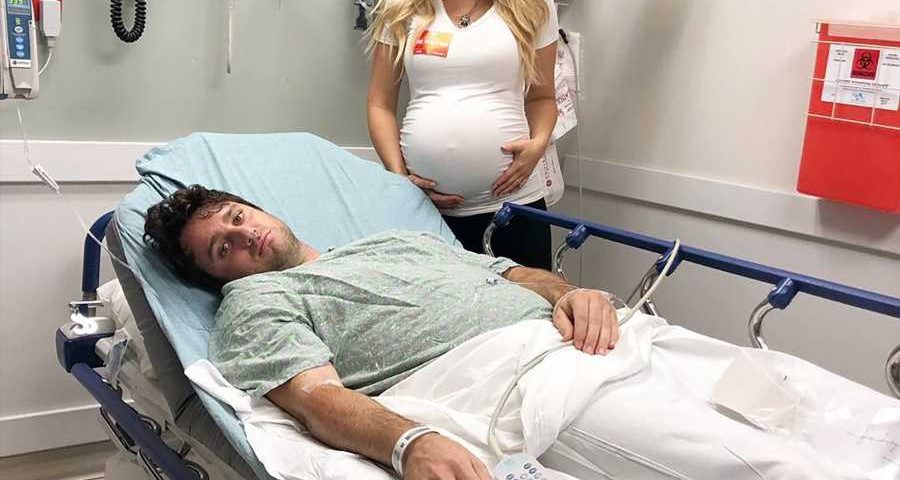 Reagan Charleston and husband Reece Thomas are spending a little more time in the hospital before she gives birth than originally expected.

The Southern Charm New Orleans star, 31, revealed on Instagram Tuesday that Thomas has been hospitalized with appendicitis and that he’ll have to stay in the hospital for a week.

“Less than 24 hours before I give birth — DID NOT think this guy would be in a hospital bed!! Perfect timing for a case of Appendicitis!!! NBD ? God has a sense of humor — UPDATE! Reece will be in hospital for at least a WEEK!!! But they are going to wheel him up for the delivery ?‍♀️?‍♀️?‍♀️” Charleston captioned a photo of the couple in a hospital room, with her hands on her baby bump and Thomas in a hospital gown.

Reece’s unexpected hospital visit isn’t the first bump in the road on the couple’s journey to parenthood.

Thomas said on his Instagram last week that there was a moment when they thought the baby would be premature.

“8 weeks ago, we were in the hospital scared we would have a premature baby. Reagan was already dilated and we had to prepare ourselves for a change of plans,” he said in a caption under a video of Charleston in the hospital.

“Both girls toughed it out and momma made it like she said she would. Now we have a fully developed little girl who could make her big entrance any day now… and bae had time to pack her own hospital bag lol fake eyelashes are not priority. I was panic packing. What can I say ?” he added.

In the video, Charleston says that they will name their baby girl Reece, “for her daddy.”

Charleston reposted her husband’s video at her 38-week mark, saying “I was so nervous this day!! 38 weeks is the milestone we prayed to see! God is good.”

Charleston and Thomas revealed to PEOPLE exclusively in May that they were married and expecting a baby due in June.

“We’re thrilled!” Charleston told PEOPLE at the time. “Everything has been in hyperdrive, but it’s been incredible.”

Her union with Thomas marks Charleston’s second marriage; she and Jeff Charleston decided to go their separate ways after six years of marriage last June.

“He’s my second chance,” Charleston said of Thomas, who she had previously dated and reconnected with after her divorce.

“I’d gone through this really difficult transition in my life after my divorce and I was looking at being 30 years old where my friends were getting married for the first time and having babies and starting families and I was looking at completely starting over. That was terrifying. But then Reece came back into my life and everything fell into place.”

“I can’t see my life any other way right now,” she added. “It feels like everything is perfect.”