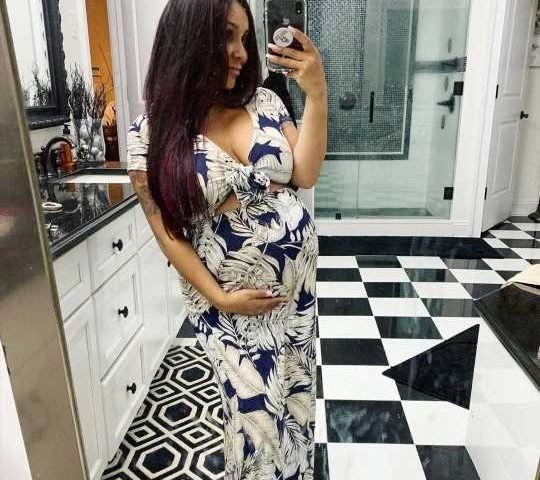 The pregnant Jersey Shore personality, 31, took to Instagram on Wednesday to solicit advice from her followers about which dress to wear to her upcoming baby shower.

Most of the outfits Polizzi, who’s expecting a baby boy, wore in the five snapshots had at least some blue throughout their various patterns.

“MAWMA’S I need your help! My family is throwing me a Sprinkle this weekend & these are my options from @thesnookishop ?,” she captioned the photos. “Although they aren’t maternity, the stretch and comfort works!”

“Let me know in the comments below which pic I should wear! 1,2,3,4 or 5,” she instructed, adding of her 4½-year-old daughter Giovanna Marie, who appears adorably in most of the shots, “Thanks to my stylist @sissygiovanna for always making sure mommy looks okay!”

Pregnant Nicole ‘Snooki’ Polizzi Shares Sweet New Photos of Her Lookalike Children: “Is This Not Me and Jionni?”

Many of Polizzi’s friends and Jersey Shore cast mates weighed in with comments on her post, including close pals and fellow moms Jenni “JWoww” Farley and Deena Cortese.

“The last one mama !!! ?,” wrote Cortese, 32, while Farley, 34, didn’t offer advice so much as a hilarious promise about her own appearance at the event: “IM SHOWING UP IN A MOOMOO.”

Mike “The Situation” Sorrentino‘s wife Lauren chimed in, telling Polizzi she was “obsessed” with the last dress, too: a white-and-navy-blue number featuring a foliage print, tie-style front and partially cut-out midsection.

“Obsessed w 5!! & hoping I can look this good pregnant!” said Lauren, 34, whose husband is currently serving an eight-month prison sentence after pleading guilty to one count of tax evasion.

After announcing in November that she and husband Jionni LaValle were expecting a sibling for Giovanna and her big brother Lorenzo Dominic, 6½, Polizzi revealed the following month that the baby will be a boy.

The soon-to-be mom of three surprised fans in mid-April by sharing the name of her son, who is expected to arrive in June, on Instagram.

While thanking Cortese for some baby gifts, Polizzi showed off the personalized teddy bear security blanket, piggy bank and a fleece throw blanket she’d received — all with the name “Angelo” printed on them.

“Look what Deena got me!” said the reality star and fashion designer, before confirming the moniker news: “So you guys know the name, it’s gonna be Angelo.”