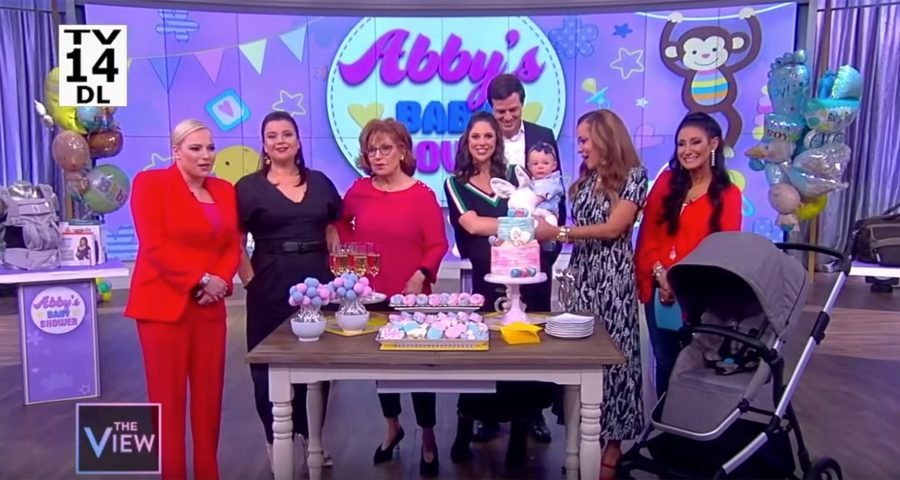 Abby Huntsman is getting showered with love!

The View star celebrated her second and third children (twins, a boy and a girl) on the way at a surprise bash on the set of Wednesday’s episode, attended by her fellow hosts Joy Behar, Meghan McCain, Sunny Hostin and Ana Navarro, plus guest Chelsea Clinton and Huntsman’s sister Liddy — the latter two of whom are also pregnant!

“I’m shocked. This show is really good at surprises,” Huntsman, 32, said after emerging from backstage to find a set decked out in balloons and other decorations. “I’m impressed.”

Also in attendance? An audience full of expectant moms, who were gifted a collection of “must-have baby items” in a special segment of the show where each product was discussed in detail after its celebratory unveiling.

On top of the incredible giveaways, decorations, colorful dessert table and more, there was one more big surprise for the guest of honor: a visit from her husband Jeffrey Livingston and their 16-month-old daughter Isabel Grace.

Huntsman was shocked and overjoyed as the duo appeared from backstage — but Isabel wasn’t as stoked, soon beginning to cry at the overwhelming new environment before her mom held her close to comfort her. The adorable baby girl eventually calmed down, looking out at the audience in wonder.

“To all the moms-to-be who lugged their baby bellies here today,” Huntsman said at the end of the episode, raising a glass of non-alcoholic sparkling cider to the fellow moms-to-be in the audience. “To all you moms, good luck! It’s gonna be amazing.”

Huntsman revealed her double-baby news exclusively to PEOPLE in early January, sharing that she and Livingston would be welcoming a brother and sister for their daughter Isabel.

She explained that the couple conceived without fertility treatments, making the surprise an even bigger one — and after the initial shock, a much-welcomed bit of news considering they wanted their children to be close in age.

“I think he saw two sacs in there and I could see it on his face. He turned white, and then when the doctor told us, he fell. Another doctor had to come in, and they were wiping him down with towels and giving him sugar,” Huntsman told PEOPLE of her husband. “I was sitting there with my feet still in the straps. I’m like, ‘This is ridiculous. I’m the one that has to physically do this.’ “

“It was just one of those things like out of a movie, but I get it,” she continued. “[As] a dad, I think he’s thinking about the costs of everything and the logistics. Now we’re so excited.”