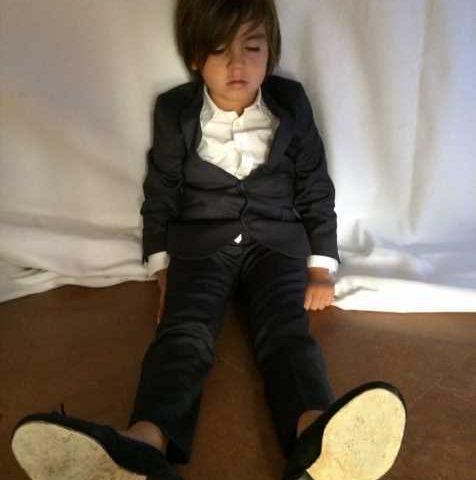 Talk about an adorable throwback!

In honor of Kanye and Kim Kardashian West‘s fifth wedding anniversary on Friday, the bride’s big sister Kourtney Kardashian shared her “absolute favorite photo” from the Italy-based event: a snapshot of her son Mason Dash, who was just 4 years old at the time.

The cute photo sees the little boy tuckered out before the festivities even began, having sneaked away to get some snoozes in under a table before performing his very important job during the ceremony.

“My absolute favorite photo from Kanye and Kim’s wedding is this one of Mason,” Kardashian, 40, captioned the memory. “We couldn’t find him, it was almost time to walk down the aisle and he was the ring bearer. We finally found him asleep underneath a table in the back room in the old Italian fortress where we were all getting ready.”

“My baby is so big now ?,” she continued, adding that daughter Penelope Scotland, now 6½, “was just a baby at the wedding and [4-year-old son Reign Aston] was in my tummy but nobody knew yet.”

To celebrate their big relationship milestone, Kardashian West, 38, shared a slideshow of behind-the-scenes photos from her stunning May 24, 2014, wedding in Florence, Italy.

“A little behind the scenes from our wedding day 5 years ago,” she captioned the post, which included photos of the rapper, 41, getting ready for the big day with Scott Disick by his side, as well as a snapshot of the Miami pastor who married them, Rich Wilkerson Jr.

In another tweet, she wrote, “5 years ago I married my best friend.”

The Keeping Up with the Kardashians star and mother of four also shared a photo of her custom Givenchy wedding gown, designed by Riccardo Tisci.

The anniversary comes two weeks after the couple welcomed their fourth child, a son named Psalm, via surrogate on May 9 and eight days later, the proud new mom revealed his name on social media alongside his first snapshot. The two are also parents to daughter Chicago, 16 months, and North, 6 next month, plus son Saint, 3.

“He’s here and he’s perfect!” Kardashian West said in her initial announcement, adding in a separate tweet, “He’s also Chicago’s twin lol I’m sure he will change a lot but now he looks just like her.”

A source close to the rapper previously confirmed to PEOPLE that Psalm’s biblical moniker was a reflection on West’s recent renewed dedication to his Christian faith.

“Kanye has been going through a spiritual revival lately. Every name has a meaning that is personal between Kanye and Kim and the child,” the insider said. “Psalm is a good reflection of where Kanye and Kim are spiritually.”