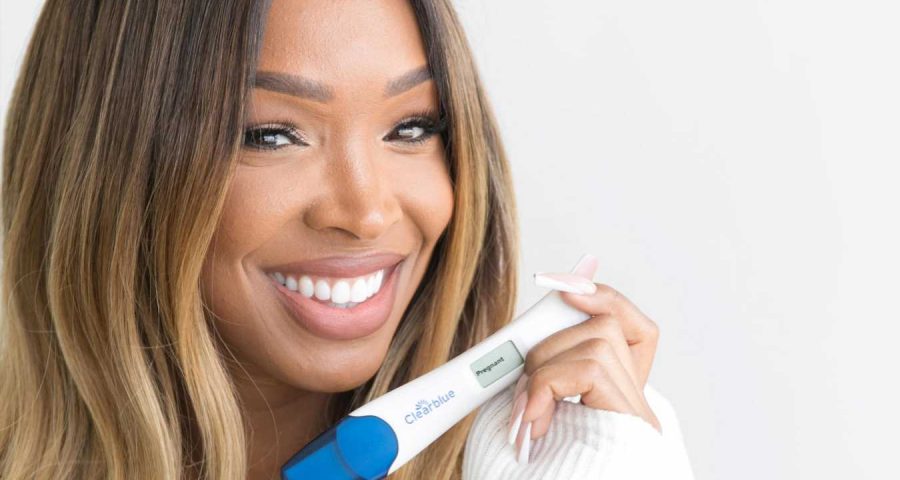 Malika Haqq is going to be a mom!

The Keeping Up with the Kardashians star, 36, is expecting her first child, she confirms to PEOPLE. Haqq, who is currently 14 weeks along in her pregnancy, is due in March.

“I have always wanted to be a mother and it’s still a little bit surprising but I’m overjoyed!” she tells PEOPLE. “I’m a very emotional person anyway, but this is another heightening of emotion … I feel really good about where I am in my life being pregnant now.”

Haqq, who prefers not to disclose the father’s identity at this time, first learned she was pregnant after monitoring her body for several months with Clearblue’s Advanced Digital Ovulation Test and realizing her period was three days late.

The Good American model then took one of Clearblue’s Digital Pregnancy Tests, which delivered the positive results that Haqq described as “shocking” and unlike any of her past experiences.

“I’ve taken Clearblue’s tests before … this was quite different,” she admits. “This was a morning where I was not expecting it to go a certain way … I saw ‘Pregnant’ and I was in shock.”

That feeling of shock continued for Haqq (who is a twin) when she went to an early ultrasound appointment and they detected two heartbeats. The doctor later confirmed that it was just one baby and the pulse was in both the fetus and umbilical cord due to their proximity — a moment that was quite relieving for Haqq.

“I would love to have twins, just not my first pregnancy,” she admits. “It would’ve been cute, but it was also nice to find out that the first one out is just a single.”

Despite the initial surprise, Haqq is now excitedly beginning to share the news with her friends and family while she prepares for the arrival of her baby, whose sex she says she has learned but is preferring to keep under wraps “for a little bit longer.”

“Learning the baby’s sex was a big deal for me and now I feel like I have time,” she shares. “I have time to think about nursery ideas, to think about a name. I’m just really enjoying now, getting to a point where I can celebrate being pregnant and [it] not being a secret.”

The star has been able to genuinely enjoy her pregnancy, as it has been very smooth and without morning sickness. “I have been incredibly blessed,” she says. “I have not been sick a day. Not one day. That, for me, has probably been the thing I’ve been so grateful for thus far — coming second to knowing that I have a healthy baby.”

Malika Haqq Reveals She Quit Xanax After CBD Oil Alleviated Her Anxiety: “It Really Does Help”

As she prepares to welcome her little one into the world, Haqq says she has been counting on her mother and twin sister Khadijah Haqq McCray (who is a mother of three) for tips and to keep her “pregnant brain” in check.

“I’ve really been able to rely on both of them when it comes to embarking on something for the first time in my life,” she explains. “My mom has been helping me stay mentally prepared for not stressing myself out. … She just always tries to remind me that my energy and my stress level should be that of what I want my baby to be.”

“I have tried every morning to pray and eat well and to smile and to laugh and to exercise,” Haqq adds. “I’m doing all of the things I can to prepare myself for going through this process as best as I can.”

As for her sister, she says Haqq McCray is constantly checking in with her because “she really does care that much and she wants me to know I’m not going through this by myself.”

“I know I’m not, [but] I’ve got a great case of baby brain. My pregnant brain is on 100,” she jokes to PEOPLE. “I literally left my sister’s house the other night and left my purse and my cell phone in her house … I need that kind of reassurance from her.”

RELATED: Khloé Kardashian Says Malika Is “Only” Pal She Trusts Ahead of KUWTK Cheating Scandal Episode

Being around other moms, including her best friend Khloé Kardashian, has also helped Haqq understand how she wants to parent her children.

“I have really amazing models [for] the type of mother I want to be, but I also know that I need to mother my baby the way my baby requires to be mothered,” the model says. “A lot of my disciplines and morals and values, that just comes from my mother, the way I was raised, and those are the things that I plan on implementing … but I definitely want to build the kind of mother that I am based around the child that I have.”

Until then, Haqq will be excitedly counting down the days until her bundle of joy arrives — and secretly hoping that her March baby has a birthday of its own.

“I just want to meet the little one right now! I don’t wanna wait till March,” she admits. “But at the same time, I’m practicing patience and I know this is the best thing and it gives me plenty of time to prepare.”

“We have so many birthdays in March in my family and my sister’s like, ‘I hope the baby comes on our birthday!’ and I’m like, ‘I actually hope it doesn’t!’ But we’ll see,” Haqq adds. “If that’s the gift I was meant to get for my 37th birthday, then I will take it!”