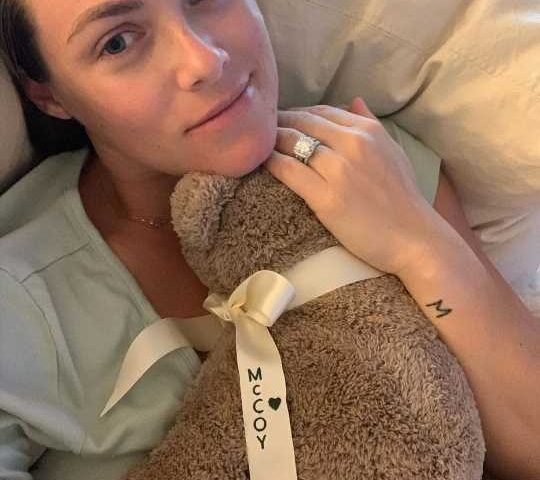 Kara Keough Bosworth's son McCoy Casey will always be with her, both emotionally and physically.

On Sunday, the daughter of Real Housewives of Orange County alumna Jeana Keough revealed that she had gotten her first tattoo in honor of her baby boy, who tragically died shortly following his birth in early April.

The body art — a small letter "M" visible on Keough Bosworth's left forearm — contains her "son's ashes in the ink …  so that my baby can be with me always."

"He can stay forever in my arms this way, in the place he last rested," she added.

"This bear weighs exactly 11 pounds and 4 ounces. Exactly the size of the hole in my heart," she wrote, referencing her son's weight at birth. "But thanks to this thoughtful gift, my arms don't feel so painfully empty."

"I can't quite articulate how much carrying the exact weight of McCoy against my body grounds me," continued the grieving mother. "I think my physical need for him will be there forever, the heaviness of his absence always present. But this sure helps."

Keough Bosworth went on to express her gratitude for the "support" she has received, admitting that she felt "privileged in [her] grief" but that certain questions she has received since McCoy's death have been difficult.

"To the poor Shipt shopper who remarked 'the baby should have been born by now, right?' and the shocked insurance agent, and the others who didn't mean to throw the grenades they did … when I say 'It's okay,' I don't mean 'I'm okay,' I'm saying I know you didn't know," she wrote. "But I promise, you're not upsetting me by 'reminding' me, I'll never need a reminder. I'm just sad that the answer to your question isn't what I hoped it would be. It should be a joyful Q&A, not a landmine. It should be different."

"Instead, here I am, clutching a stuffed toy wishing it was a real boy," Keough Bosworth added. "To my Instead Mamas, I thank you especially for all the continued comfort, encouragement, and love. And you're right, it is getting easier to bear. (Look! I even did a pun. Good for me.)"

McCoy, who arrived on April 6, suffered shoulder dystocia and a compressed umbilical cord during his home birth, and was then transferred to a hospital, where his heart started beating again after 45 minutes of chest compressions, Keough Bosworth told Good Morning America earlier this month.

"It seemed like an eternity. But he came back to fight, to see if he could live, and it was a miracle," she said.

However, the Bravo star soon found out that her son had "extremely suppressed" brain activity, and was unlikely to recover.

"We got some milestones we didn't think we'd get," she said, which included their daughter meeting her baby brother. "We got to change his diaper. I got to get peed on, which is a boy-mom thing I didn't think I'd ever get. We got to hold him, we got to feel warmth in his body."