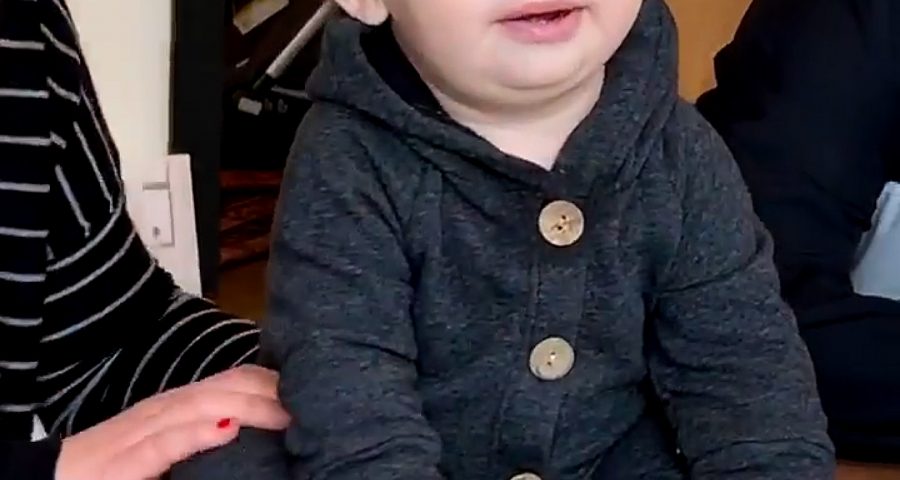 Crew is up for a big promotion to CCO: Chief Cuteness Officer.

Chip and Joanna Gaines‘ youngest child, 8 months, looks adorable in a trio of clips the Magnolia mogul shared to her Instagram Story Thursday, chronicling a meeting at which her baby boy was the center of attention.

Sitting on a table between two adults, Crew is dressed in a gray hooded outfit with large buttons down the front, sucking on a pacifier and clapping his hands in one video Joanna captioned, ” ‘Yes! I love that idea!’ – Crew, CEO.”

In the subsequent two sets of footage, Crew looks increasingly less interested in the goings-on around him, which his mama narrated, ” ‘Ok let’s wrap this meeting up, I’ve got places to be.’ – Crew.”

The last clip, showing Crew starting to play with his own feet, hilariously said, ” ‘Bla bla bla … this meeting is killin’ me.’ – Crew.”

Joanna Gaines Admits to “Beating” Herself Up Over Giving Her Kids Instant Ramen for Dinner: “They Were in Hog Heaven”

This isn’t the first time Crew has accompanied Joanna, 40, on the job. In November, the mother of five shared too-cute videos on her Instagram Story of her son playing during her work meeting.

“Future CEO,” she captioned one of the clips as the camera panned across the boardroom table and ended with a shot of the infant in his activity center.

“He’s taken over the meeting,” the former Fixer Upper star joked in another video.

Chip, 44, said in the fall issue of the couple’s magazine Magnolia Journal that he has “found that the easiest way to help my kids experience new things is by bringing them along when they get out of school” to job sites.

“I feel pretty well-educated on the myriad reasons one should not bring children to a construction site — potential for injury, skinned knees, whining, potty breaks (with no working toilets), or the inevitable stray puppy or kitten they beg me to let them bring home. There are surely a million more,” he said before explaining “why I do it anyway.”

“I see firsthand what types of things catch their attention and how they problem solve,” Chip said, adding that “there always seem to be these teachable moments, where they watch me wrangle us out of a situation and learn something from it or they embrace the courage to jump in and give me a hand.”