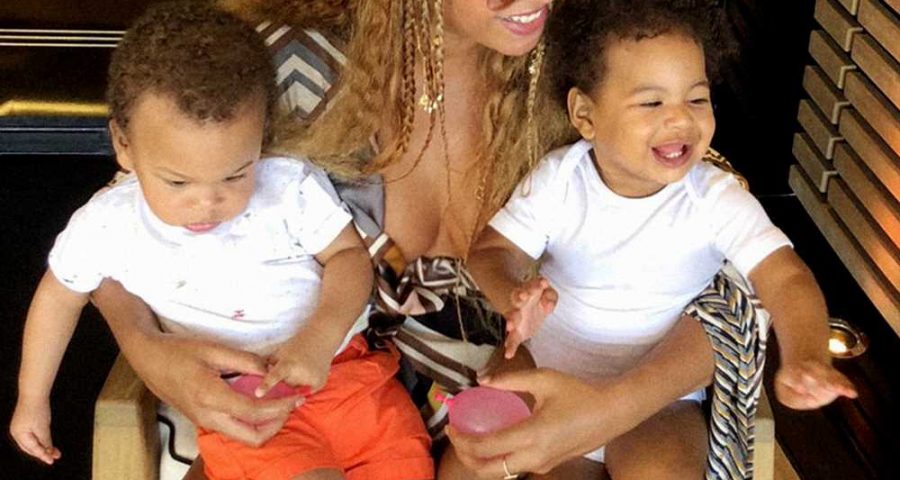 The superstar needed an emergency C-section with twins Rumi and Sir, now 2 years old, and spoke of her experience in Vogue.

The mother of three said, “I was swollen from toxemia and had been on bed rest for over a month. My health and my babies’ health were in danger, so I had an emergency C-section. We spent many weeks in the NICU. My husband was a soldier and such a strong support system for me. I am proud to have been a witness to his strength and evolution as a man, a best friend, and a father. I was in survival mode and did not grasp it all until months later. Today I have a connection to any parent who has been through such an experience. After the C-section, my core felt different. It had been major surgery. Some of your organs are shifted temporarily, and in rare cases, removed temporarily during delivery. I am not sure everyone understands that. I needed time to heal, to recover. During my recovery, I gave myself self-love and self-care, and I embraced being curvier. I accepted what my body wanted to be.”

Though the pair split in 2017, they still are loving coparents to their now 7-year-old. Faris told Redbook in 2015 that giving birth to her and Pratt’s son, Jack, nine weeks early brought them closer as parents.

She told the magazine, “My water broke in the middle of the night at seven months. We rushed to the hospital, and they were able to halt active labor with magnesium. I was at the hospital and the goal was to be in bed for four weeks … but on the seventh day, I went into labor again. I was in denial. For hours I was like, ‘I’m just having indigestion.’ Chris and I were so scared, but when Jack came out, even though he was so tiny, he looked so good to us.”

Pratt told PEOPLE of Jack’s time in the NICU, “We were scared for a long time. We prayed a lot. It restored my faith in God, not that it needed to be restored, but it really redefined it,” the actor said. “The baby was so beautiful to us, and I look back at the photos of him and it must have been jarring for other people to come in and see him, but to us he was so beautiful and perfect.”

Vanessa opened up about delivering now 2-year-old Phoenix while competing on Dancing with the Stars.

“I was in the hospital on bedrest and then my water broke. I was only 29 weeks,” Lachey said.

The mother of three continued, “I was on the operating bed and I looked up and I didn’t know a single face and I remembered thinking I hope the baby’s okay and don’t worry about me. Just make him okay.”

“When I was in the neonatal intensive care unit with my two sons, I became like every parent that was on that floor,” the actress told PEOPLE. “My husband and I were at the mercy of our nurses and doctors — our children’s lives depended on their every move.”

Going through the experience with her twins, Cy and Bowie, now 4, made her passionate about giving every mother the help they need. She told PEOPLE, “I went through it, I was there. I was a parent and my children were the ones that benefitted from having excellent services from the hospital. And I want that for every parent. I want that for every child.”

The couple’s son, Adler, was born one month earlier than expected and had to stay in the NICU for 21 days after his birth in order to be treated for fluid build-up in his lungs.

Fishel told PEOPLE, “It’s a real long, slow process in the NICU. If we have one thing to tell people about, if someone is going into the NICU with their child, it would be do not think you’re only going to be here for 48 hours or 72 hours. Maybe you will be and that will be great, but just think about this as being a marathon and not sprint. You’re here for a while, and nothing moves quickly.”

The Home & Family host and his wife were shocked when they were told that Julie would need an emergency c-section in October 2017.

Julie recalled to PEOPLE, “I called [the doctor] and she says to me, ‘When’s the last time you ate?’ And I thought, what? And she says, ‘We’re going to deliver the baby today.’” It turns out that her blood work showed she had developed intrahepatic cholestasis of pregnancy (ICP): a condition where acids from the mother’s liver can lead to fetal distress or even death.

“So everything ended really abruptly and we were prepared but we weren’t, and that’s something that happens a lot in ICP — an early delivery — because it can be very dangerous for the baby,” Julie explained, calling her pregnancy “amazing” and “perfect” up “until it wasn’t.”

The pair are parents to Parker Rose, who’s a happy and healthy baby girl and now 2 years old.

The arrival of the country singing couple’s twin boys was announced by Reba herself, but when they shared the news on Instagram, it was revealed that the boys, Macon and Samuel, were more than one month early.

Morgane wrote in a message to fans, “Thank you for all the love! We’re so grateful to finally be home with our sweet family. We would like to say a special thank you to all the incredible nurses & doctors at Centennial Women’s & Children’s Hospital in Nashville.”

“At more than a month early, we had a week-long stay in the NICU & the incredible people there kept our boys healthy & happy,” she continued. “Words cannot express our gratitude for you all & what you did for our family. From the bottom of our hearts, thank you!” she concluded.

“My water did break,” Skyy said in an Instagram Live video from her hospital bed before Alaiya’s birth, where Fetty Wap was present.

The new mom explained that both she and the rapper were “preemie” babies, telling the camera, “They’re gonna have me in the hospital for a long time and I just pray that everything do good. She’s okay, she’s fine.”

Now 1-year-old Alaiya suffers from hydrocephalus, a condition that causes bleeding and fluid in the brain, and even needed emergency brain surgery in January 2019 to “repair a malfunctioning implant in her brain that helps drain blood and fluids,” TMZ reported at the time.

In a recent photo of Alaiya, she can be seen with a big smile. Her mom captioned the photo, “My Miracle❣️As long as she’s smiling nothing else matters.”

Coronavirus update: Second wave ‘quite a possibility’ – here are the symptoms to spot
Health Problems