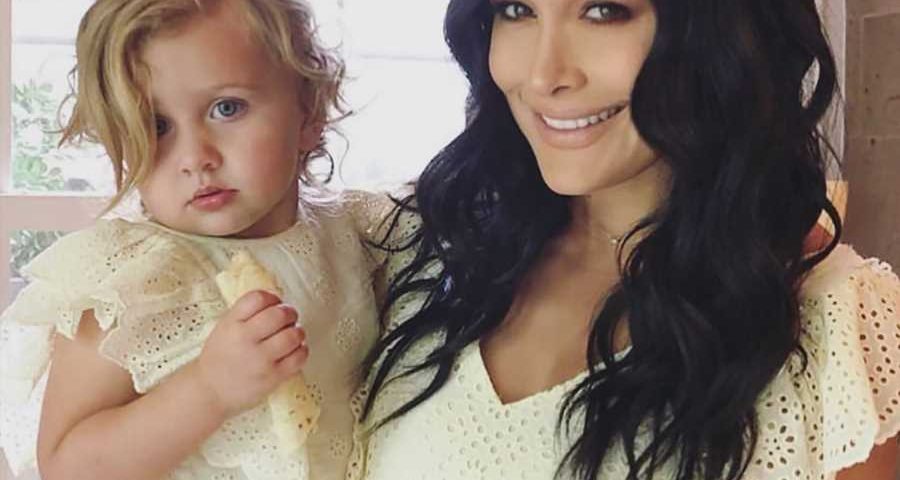 Brie Bella is opening up about her transition into motherhood.

On Wednesday, the retired WWE wrestler, 35, revealed on the latest episode of The Bellas Podcast that she struggled to embrace her new life as a first-time mom in the months following the birth of her daughter, Birdie Joe, now 2.

Speaking to her sister Nikki Bella and fellow mom guests Jamie-Lynn Sigler and Jenna Parris, Brie admitted that stepping away from the wrestling ring to welcome her first child with husband Daniel Bryan in 2017 led her to feel depressed and uncertain of her identity.

“I was a professional wrestler before Birdie,” she explained on the podcast. “We had a really big career. The hardest thing for me was kind of when Birdie was born was kind of being like, ‘Okay, I’m a mom now,’ but I didn’t want to lose the old Brie, and I really did lose my identity.”

Brie went on to recall a particularly difficult time, six weeks after giving birth, where she was sitting on the couch watching the first-ever all-women Money in the Bank pay-per-view WWE match.

RELATED: Brie Bella Opens Up About Her Struggle with Breastfeeding: ‘Mom Guilt’s the Worst Feeling’

“I’ve worked over a decade, and I worked so hard for that. I wanted to be part of that,” Brie shared. “It was like the day I got pregnant … all of sudden the women were starting to make history. They were giving them longer matches, they were doing bigger things, and I just remember feeling so bad.”

Though Brie said she never felt as though having a child was a “mistake,” she did admit to questioning the timing of her decision.

“I really had a hard time with my identity,” she told her listeners, adding that those thoughts led her to make a comeback to the sport in summer 2018. Her return, however, did not go as planned.

“I ended up making a comeback because I missed the old Brie and I failed so bad at it in front of the world,” she explained, noting she felt insecure about wearing spandex with the “baby weight” and for how her body was “not ready.”

“I got bullied online for it — people would say, ‘Motherhood, look at what it’s done to her!'” the star recalled.

RELATED: Brie Bella Talks About the Possibility of Baby Number 2

“It was the first time I broke down so much … I couldn’t get those trolls’ voices out of my head,” Brie continued. “It made me realize, ‘Brie, the old you is gone. You gotta really figure out who you are today and WWE is the past.'”

Nikki, 35, echoed her sister’s sentiments about the difficult time, recalling how during that period, she was unable to pull Brie out of her depression.

“I couldn’t say anything to her to make her happy or feel better,” Nikki, who is now also retired from the WWE, shared. “She couldn’t snap out of it.”

After some time, Brie said she sought out a life coach to help with her mental health and was eventually able to come to terms with who she really was.

“It made me think … anyone out there who struggles with depression or does go through some hard times or feels a little lost — whether it’s with your identity or just with bullying — to reach out to someone,” she advised.

“I was there and you want to be away from everyone — even my baby,” Brie added. “I was just depressed.”

This isn’t the first time that Brie has opened up about the challenges of motherhood.

In October 2018, the former wrestler revealed on an episode of Total Divas that she was suffering from mom guilt after she was unable to produce as much breastmilk for her daughter as she would’ve preferred.

“My breast milk’s taken a huge dip,” she said on the reality show. “I used to have enough where I donate. And now I’ve realized in the last month, that I can’t even keep up with her during the day so I’ve had to introduce one bottle of formula a day.”

“I’m trying to pump and do all this stuff, but it’s the stress,” she continued. “I hate pumping. To the point it makes me feel bad when I’m doing it because I’m so miserable.”

“The guilt always plays in,” Brie added. “Mom guilt’s the worst feeling in the world.”

Despite the challenges that come with parenthood, Brie recently told PEOPLE she’s not ruling out the possibility of a second child.