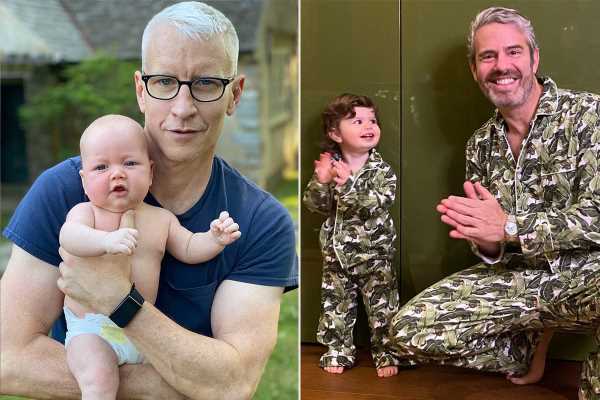 Anderson Cooper and Andy Cohen's little ones are slowly but surely building their bond!

Cohen, 52, said that "the highlight of his week" over "the last couple months has been taking Ben over on Saturday or Sunday to have a little hangout with Wyatt for a couple hours."

"And I feel like for the first few times, Ben didn't really want anything to do with Wyatt, or to even acknowledge him. But I feel like last night was kind of a milestone, don't you?" he asked the CNN anchor.

"Yeah, it was sweet because I was playing with them both and then he kissed Wyatt on the cheek and hugged him and it was so cute," replied Cooper, 53. "He did that a couple of times. So my heart kind of melted." Anderson Cooper Shares Adorable Selfie with Son Wyatt, 5 Months: "He Is Such a Happy Baby"

Early last month, Cooper revealed that Wyatt had recently become acquainted with Ben "a couple weeks ago" for the first time in person since the beginning of the coronavirus pandemic. (They previously met virtually back in June, on Father's Day.)

While he wasn't sure "if Wyatt even understands who [Ben] is" at that juncture, Cooper added during his appearance on Live with Kelly and Ryan that his baby boy was "sort of fascinated" by the toddler anyway.

"And Benjamin was very sweet with him," recalled the proud dad. "He kept poking him."

Cooper added that fatherhood has "woken [him] up," explaining, "I've always felt like my life hadn't really begun, which is ridiculous, but suddenly you wake up and you're like, 'This is what it's all about. There's nothing more important than this.' I'm just incredibly blessed and lucky."

And Cohen and Cooper's own social lives certainly look a bit different now that they're both parents!

On Oct. 9, the Watch What Happens Live host posted a selfie taken in New York City's Greenwich Village, smiling alongside Cooper as they took down their masks for the photo op.

The friends were bundled up as they enjoyed some outdoor time with what appeared to be Cohen's son Ben, partially in-frame as he played on a swing. The Anderson Cooper 360° host's baby boy Wyatt was not pictured.

"Playground Dads! (Btw my sweater is from @grantedsweatercompany)," Cohen captioned the photo on Instagram.