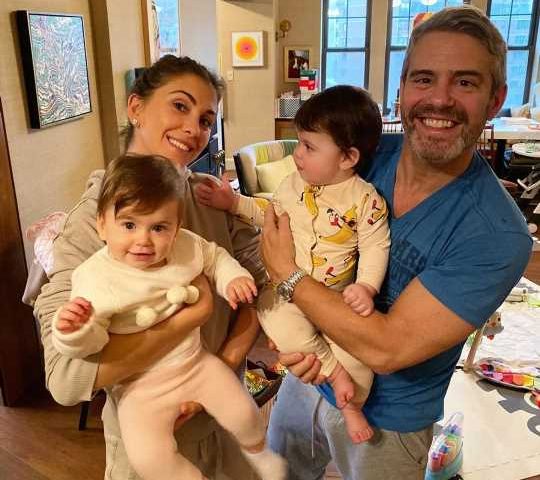 Andy Cohen’s baby boy and Ryan Serhant’s little girl are already Bravo besties! The two kids got together in late October 2019 for a playdate, while surrounded by their dads and Zena’s mom Emilia Bechrakis Serhant.

In a video Serhant shared to his Instagram Story, Cohen and Bechrakis Serhant are seen sitting on the floor with their babies, while the Million Dollar Listing New York star records the adorable footage.

“Smile!” Serhant said from behind the camera. “Zena, say hi to your boyfriend!”

He captioned the clip, “Their first play date!” and tagged both his wife and the Watch What Happens Live host.

Nate Berkus revealed on PEOPLE NOW that his daughter Poppy and Jenna Bush Hager’s daughter, who is also named Poppy, are in the same class at school. In fact, the two share a locker, so in the past, Berkus has accidently “stole everything that belongs to Poppy H.” and had to return water bottles, sweaters and backpacks to the right Poppy. Whoops!

Hayley Hubbard, wife of Florida Georgia Line’s Tyler Hubbard, got baby girl Olivia together with Lauren Akins, wife of country star Thomas Rhett, and her daughter Ada to hang out and take naps.

Serena Williams and Ciara happened to be in Cannes, Frances at the same time with their girls in June 2019, so they decided to enjoy and impromptu pool date with their little ladies.

Saved by the Bell‘s Mario Lopez, wife Courtney and Tiffani Thiessen love getting their kids together, especially when it’s an occasion where the former costars can support each other. Here, the Lopez family can be seen at Thiessen’s Num Noms event in L.A.

Ciara’s son Future and Macklemore’s daughter Sloane came together for a cuddly selfie during a sporting event.

We wish nothing more than to be flies on this star-studded wall! Mariah Carey’s twins and Beyoncé’s daughter dress up for their playdate, while their famous moms catch up.

Beyoncè’s daughter Blue is one lucky girl. Not only does she have the honor of having Queen Bey as mom, but she also has a built-in BFF in Gwyneth Paltrow’s daughter Apple.

Dashiel and Vivienne might be young, but their mothers — Resident Evil: The Final Chapter co-stars Milla Jovovich and Ali Larter — already have big plans for their futures.

“Happy 6 month birthday to my new buddy #dashiellean,” Larter wrote in 2015, alongside this sweet picture of their play date. “I wonder if we’ll be fighting the bad guys like our mommies!”

Cozy in pajamas after a nice bath is the ideal time to chill with the crew.

North is the most popular girl at school, and she didn’t even go to school when this photo was taken. Here, she is holding hands with her squad members — which include Kardashian ex-makeup artist Joyce Bonelli’s son, Zeplin — as they make their way to Disney on Ice.

The only thing sweeter than gelato is this precious date between Hilary Duff’s son Luca and Jack Osbourne’s daughter, Pearl.

Mariah Carey and Nick Cannon’s twins, Monroe and Moroccan, had an adorable toy-car-racing play date with Alicia Keys and Swizz Beatz’ son, Egypt back in 2012. We hope they still hang — and that we can somehow infiltrate their squad.

“Frankie is the full-totes Alfalfa at all times and no matter what way I try to finesse the hair it just [sticks] right back up,” Drew Barrymore told Jimmy Fallon in 2013 of her daughter, Frankie, who hangs out with Fallon’s little one Winnie on the regular.