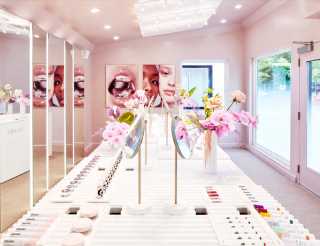 The series E round was led by Lone Pine Capital, with participation from existing investors Forerunner Ventures, Index Ventures, IVP, Sequoia Capital and Thrive Capital. The company said it would use the money to “scale its online and offline experiences, taking an e-commerce-first approach to entering new international markets, and deepening its presence through dozens of new stores planned for the United States and globally in the coming years.”

With its previous $100 million series D, Glossier became one of beauty’s unicorns, valued at more than $1 billion. With the series E raise, a source with knowledge of company financials confirmed that Glossier’s valuation stands at $1.8 billion.

Glossier is one of a handful of beauty companies that has followed the traditional VC funding route. Historically, most beauty companies scaled organically before taking on later-stage private equity money. But those traditions have changed as venture capital has flooded the consumer packaged goods space in recent years.

At one point, Glossier’s founder, Emily Weiss, had considered taking Glossier public, saying in 2018 that her goal was to build “a massive, stand-alone business,” and that “If an IPO is the best way for us to get there, then we’ll do that.”

Glossier, now about seven years old, was the first splashy, modern direct-to-consumer beauty business. The brand became known for its Instagram-friendly minimal aesthetic and cool-girl models who didn’t appear to be wearing any makeup at all.

Glossier said in a statement that two in every five women between ages 18 and 34 in the U.S. have heard of Glossier, and that the company was able to increase online sales across categories during the pandemic.

“When Glossier launched as a digitally native beauty company, we were an anomaly in our industry, which has been slow to innovate beyond brick and mortar,” Weiss said in a statement. “Now, nearly seven years into Glossier’s journey, our strategy and the expectations of beauty consumers everywhere are aligned: beauty discovery increasingly begins online as people look for inspiration from friends and strangers alike, and customers want to move fluidly between immersive and personalized e-commerce and retail experiences.”

Glossier’s new investor, Kelly Granat at Lone Pine, said that Glossier is an “iconic and era-defining beauty company,” and that the firm wanted to play a role in bringing the brand’s products and experiences to “people everywhere.”

For more from WWD.com, see: