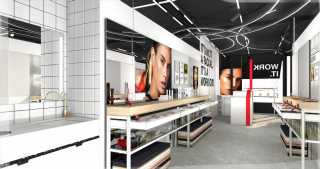 FACE FIRST: FaceGym is in expansion mode.
The beauty company, best known for their facial massages, is forging ahead with its ambitious retail rollout plans with a new space in Notting Hill, West London having just opened this month. It has also been branching out into skin care and particularly the active beauty arena, with the release of a new range of motion-activated, workout skin-care sticks.
The idea was to create a product for time-starved women: “I didn’t want to choose between spending 40 minutes on a face mask or the gym and that’s where I got the initial idea of being able to work out the face while I’m working out my body,” said Inge Theron, founder of FaceGym.
The sticks are applied pre-workout and the formula is meant to be activated from the heat of the skin. “It’s motion-activated skin care, and it's meant to really help accelerate metabolism and draw out toxins. It stays on the skin even while you sweat and the slow-release formula actually delivers the product deep into your epidermis,” Theron added.
At the moment, there are four formulations, but Theron plans to add at least four more to target different skin concerns by the end of the year.
FaceGym is working on producing more at-home products for their customers such as their signature Skin IV product, a skin-care cocktail with active acids, vitamins and peptides to boost collagen, that they use in their facial treatments.
The sticks sell for 32 pounds.
Active beauty is a growing category, with the likes of Lululemon introducing a new self-care range designed for customers to freshen up post-workout.
Retail expansion is another big focus and Theron said she relies on social media to get customer feedback and determine new opportunities for openings.
“We are just really driven by our customers on social media asking us to open in their region. Many of our customers were requesting us to open in their neighborhoods, so that’s why we decided to open in Notting Hill,” she added.
FaceGym has stand-alone stores in St. John's Wood and King's Road in west London, Coal Drops Yard in King's Cross and a concession in Selfridges.
In addition to expanding in the company's home of the U.K., Theron is also looking globally.
In North America, she’s opened mini concept stores in the Upper East Side and Tribeca and is looking to open in Los Angeles, and Miami, while there has also been interest from Canadian consumers.
There's potential in the Middle East, given that a large percentage of the customer base in Face Gym's Selfridges space are Middle Eastern. Theron also wants to expand into Asia, however, facial massages are already a key part of facial treatments in the region and at much more accessible price points.
Source: Read Full Article