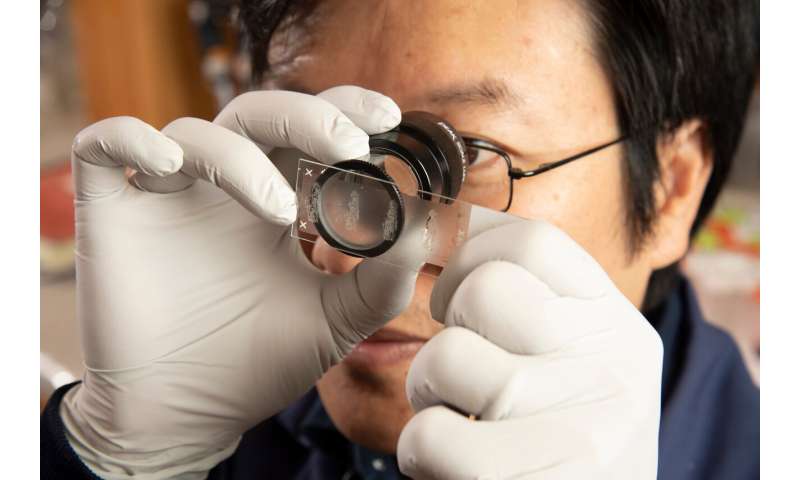 Biomedical engineers at Duke University have discovered a pharmaceutical target that, when activated, can reverse bone degradation caused by osteoporosis in mouse models of the disease.

“The most widely used drugs currently approved by the FDA to treat osteoporosis can prevent further bone loss, but they don’t help rebuild the bone,” said Shyni Varghese, professor of biomedical engineering, mechanical engineering and materials science, and orthopedics at Duke.

“We’ve discovered a biochemical receptor that, when activated, can do both,” added Yu-Ru “Vernon” Shih, a research scientist in Varghese’s lab and the study’s first author.

The findings appear online August 21 in the journal Science Advances.

Despite its apparent rigidity, bone is living tissue constantly being broken down and replaced by the body. Osteoporosis occurs when old tissue is lost faster than new tissue can be created, causing the bone to become weak and brittle. The disease afflicts more than 40 million men and women in the United States alone and is most common in older women past menopause.

In 2014, Varghese was studying the role of popular biomedical devices made of calcium phosphate in promoting bone repair and regeneration. She discovered that the biochemical adenosine acting on the A2B receptor plays a particularly large role in promoting bone growth. It stood to reason that a lack of the chemical might play a role in the development of osteoporosis, so Varghese decided to find out.

In the study, Varghese and her research team studied mice that had had their ovaries removed to mimic post-menopause osteoporosis. They looked at the expression levels of two enzymes that help produce adenosine as well as the levels of adenosine traveling between cells. As predicted, they discovered that the mice’s lack of estrogen was causing all three to plummet.

The researchers then tested to see if increasing the levels of adenosine in the mice would help reverse the damaging effects of the disease. But rather than pumping in adenosine itself, they injected a non-hormonal small molecule produced by Bayer that activates the A2B receptor.

“The mice that received the drug were completely cured,” said Varghese. “Their bones were just as healthy as the control group without osteoporosis.”

While the discovery of a pharmaceutical target capable of reversing osteoporosis is exciting, creating a small molecule drug that can activate it without side effects is a difficult task. Adenosine is created naturally throughout the entire body and has many roles such as modulating neurons and regulating blood flow to various organs. Researchers can’t simply dump a bunch of it into the bloodstream to stop bone degradation without side effects.