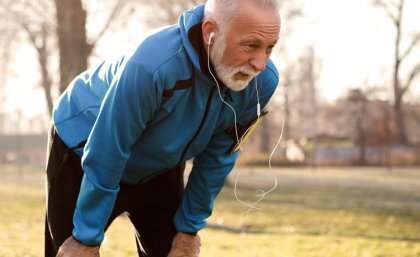 High intensity interval training (HIIT) may be doing more than just keeping you fit and strong—it may also help prevent age-related cognitive illnesses, such as dementia.

Researcher Dr. Tom Bailey from the Centre for Research on Exercise, Physical Activity and Health at UQ’s School of Human Movement and Nutrition Sciences said that while high intensity interval training was popular for improving cardiovascular health, its effect on brain health and function wasn’t known.

“As we age, the flow of blood to the brain and arterial function decreases,” Dr. Bailey said.

“These factors have been linked to a risk of cognitive decline and cardiovascular events, such as stroke.

The study, conducted in collaboration with Associate Professor Christopher Askew at the University of the Sunshine Coast and neuroscientists at the German Sport University Cologne, was the first of its kind to compare the brain blood flow in younger and older men during both continuous and interval exercise.

“One of the key takeaways from the study was that both the exercise and the rest period were important for increasing brain blood flow in older adults,” Dr. Bailey said.

“The benefits of exercise on brain function are thought to be caused by the increase in blood flow and shear stress, the frictional force of blood along the lining of the arteries, which occurs during exercise.

“This study aimed to identify the type or format of exercise that causes the greatest increases in brain blood flow, so we could help to optimize exercise programs to enhance brain function.”

While this study focused on short-term increases in brain blood flow, Dr. Bailey said the next step was to investigate the benefits of interval exercise on brain health in the long term.